On our Forum: Will there be any sea left? 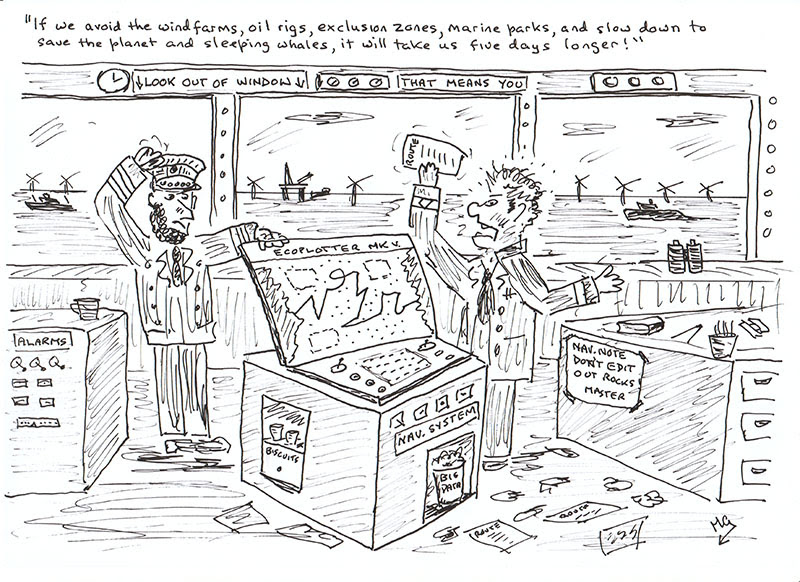 As the governmental delegates to Cop26, safely delivered home after their Scottish excursion, start to work out how they can deliver their extravagant zero-carbon pledges by the due date, it is becoming manifestly clear that it will be neither cheap nor easy. It is very easy for politicians and environmental interests to talk about “clean, renewable energy” but providing it in sufficient quantities to power up our technological world is a colossal task that puts a strain on our imagination, as only a tiny proportion of what will be needed currently exists.

It has been suggested that green ammonia or green methanol, or perhaps even synthetic LNG will end up as the fuel of choice to power the world fleet, assuming we see a value in maintaining world trade. But has anyone really considered the amazing amount of “renewable” electrical power that will be required to provide the hydrogen feedstock from electrolysis to produce this quantity of bunkers? And bear in mind that just as the marine industry has been accustomed to fuel its ships using the “bottom of the barrel” filth nobody else wanted, it will probably be at the back of the queue for all this lovely green fuel, as others will be better able to pay for it.

But let’s not be too depressed. The immediate future is blown in the wind and it is clear that anyone involved in the offshore (or even onshore) wind business can look forward to plenty of activity. Old-fashioned folk who drive ships around for a living have long become used to being diverted from their traditional tracks from A to B, because somebody has insisted on planting a huge wind farm array on the seabed over which they used to track. We might expect a lot more of this activity as the number of turbines grows tenfold, or twentyfold, depending on what you might have been reading.

It is probably not much use protesting about all the additional miles you are going to have to steam to circumvent these obstacles safely, because the rights of those who want to obstruct your passage will invariably trump the needs of navigation. It’s a habit the energetic energy lobby got into all those years ago, when they wanted to plonk oil rigs in your way and the precedent will live on into the renewable era.

While the North Sea is affording a delightful planting spot for wind turbines, with the Dogger Bank Field soon to be the world’s biggest array, where once only herrings throve, and the Heligoland Bight affording only narrow channels between the windmills into the German ports, the rest of the world is intent on catching up. If you have been reading your maritime press assiduously, you will have been aware that the coasts of California have been swarming with anchored or drifting containerships impatiently awaiting their berths.

They had better sort out their stevedoring soon, because those “advancing clean energy development” are seeking to fence off a huge area of the sea, twenty miles off the coast upon which it is hoped to plant a giant wind farm. According to the useful Millers’ Maritime Newsletter which keeps us informed of US developments, the proposed Morro Bay Wind Energy Area of 240,898 acres or 376 square miles (it is so much more user-friendly than horrible hectares) is now seeking permission to start planting. And if we are going to even partly match the ambitions of those requiring clean, green fuel for power, industry and transportation, many more acres of sea are going to be converted to electrical production, with all their turbines, underwater cables and associated paraphernalia. There is not even a need for shallow water, either, as floating devices have been trialled and found perfectly practical, only requiring a decent mooring.

I was reading that the coasts of China will soon have the largest conglomeration of offshore turbines in the world, which will make problematical the sanity of those navigating the South China Sea, whose lives are already traumatised by gigantic fleets of suicidal fishing boats. It is enough to push them over the edge.

But the ambitions of the renewable energy interests are only half of the story, as hundreds of square miles of the once-usable sea are fenced off for “marine parks” or environmental reserves, where marine life will not be troubled by propeller noise, or people dropping anchors on the sea bottom, trawlers or worst of all – dredgers. There was once a sort of freedom that you felt when the last mooring line had been cast off and the bow of the ship was turned seawards. The next generation, one suspects, as they weave their way around all the obstructions in their tortuous way to what bits of open ocean that remain, are going to feel rather like trespassers. (Cartoon by Michael Grey)