Montreal dockers on picket lines ahead of possible Ottawa intervention 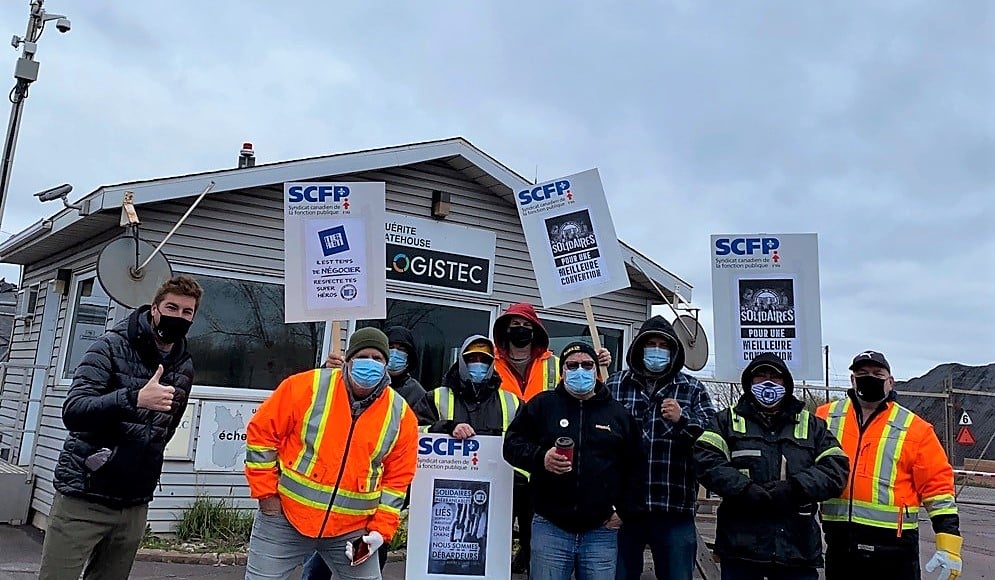 Some 1,150 Montreal dockers today began an “indefinite” strike that shut down almost all operations at Canada’s second largest port as the longest labour conflict in its modern history showed no signs of abating. But the work stoppage could be short-lived after the federal government on Sunday announced plans to rush through back-to-work legislation later this week if the longshore union, CUPE 375, and the Maritime Employers Association did not rapidly negotiate a compromise accord. The existing collective agreement expired on December 31, 2018.

Both sides were present at a meeting with federal mediators which began today at 9 am – two hours after the strike started and picket lines spread throughout various areas of the port.

But sparks were continuing to fly as the meeting was taking place, with Mark Hankock, President of the Canadian Union of Public Employees (CUPE) going to social media to attack the Ottawa’s intervention plan and accusing the Liberal government of “siding with bosses against workers.”

“All 700,000 members of CUPE nationwide are sending our solidarity to our sisters and brothers in Syndicat des débardeurs – SCFP section locale 375 at the Port of Montreal.,” Mr. Hancock said. “Our members offered to withdraw their strike notice if their employer agreed to drop their pressure tactics. But once again the Trudeau Liberals are acting like Conservatives, siding with bosses against workers by meddling in the bargaining process.

“There can never be free, fair collective bargaining in Canada under the threat of back-to-work legislation.”

“We believe in the collective bargaining process,” she said, adding: “However, the government must act when all other efforts have been exhausted and a work stoppage is causing significant economic harm to Canadians.”

Martin Imbleau, President and CEO of the Montreal Port Authority, welcomed the news of potential Ottawa intervention – a step strongly urged in recent weeks by freight forwarders and a host of business groups as several shipping lines began diverting their vessels, with Halifax high up on the list of alternatives. The port reported an approximate 10% decline in tonnage in March.

The  union had announced the strike call Friday in response to changes made by the Maritime Employers Association in work shifts and guaranteed income arrangements after the union launched overtime and weekend strikes on April 17. The union especially objected to the employer decision requiring 80% of the dockers to work a seven-hour shift instead of a five-hour shift.

Following a series of strikes last summer, the two parties concluded a 7-month armistice that ended on March 21.

The Port of Montreal has recalled that the strike episodes in the summer of 2020 hit hard, with 80,000 TEUs (twenty-foot equivalent units) grounded or rerouted and some 20 vessels diverted to competing ports, a trend that certain shipping lines began in recent months given the uncertainty associated with the labour dispute. (photo CUPE 375)