By Denis Margot, President of Eolyss, with the collaboration of David Bolduc, Executive Director of Green Marine, and Mathieu Saint-Pierre, President and CEO of the Société de développement économique du Saint-Laurent (SODES).

The greenhouse effect is a natural phenomenon caused by certain atmospheric gases that retain part of the heat received from the Sun and protect the Earth from freezing temperatures. (1) Without this phenomenon, the average temperature would be -18C instead of +15C and it is likely that no evolved life could have developed on Earth. It is therefore a beneficial phenomenon that we could not do without. However, human industrial activity is disturbing this balance and threatens to modify the concentration of atmospheric gases beyond a threshold that could cause irreversible changes to the planet’s climate.

The International Maritime Organization (IMO) has set a target of reducing the carbon footprint of the maritime industry by 50% by 2050 compared to 2008, and reaching 100% by 2100. Given the expected growth in maritime transport, this means that by 2050, ships will have to be nearly 75% more efficient on the GHG front than in 2008.

Once the objective is set, next step is to define the means and tools to achieve it. Among these, the financialization of GHG emissions through the carbon market is gradually being imposed throughout the world, and more particularly in Europe.

The principle of the carbon market is as follows: a state determines a GHG emission quota for economic actors in a sector of activity, quota that is evaluated each year and revised downwards in order to achieve GHG reduction objectives. If an actor does not respect this quota and emits for example 1000 t of GHGs more than authorized, it will have to buy carbon credits from more efficient players who have emitted less GHGs than their quotas. Thus, this system encourages companies to innovate and to look for solutions that are more and more efficient and that emit less and less GHG by granting them financial instruments that they can trade on an exchange platform dedicated to this type of product. The price of a ton of carbon, the basic unit of this system, is in the order of CAN$20 to CAN$30 since the beginning of  2021 and is partly guided by the authorities (through penalties imposed on actors exceeding their quotas). There seems to be a consensus that the price per ton of GHGs should be around CAN$ 100 to 150 as of 2030.

One of the great absentees from this carbon trading system is the maritime transport sector, which alone emits more GHGs than Germany and France combined, and whose emissions prospects, if nothing is done, show a solid growth.²This absence is not the sign of a refusal to abide by the rules, but rather of the particular situation of this activity which is, in essence, a global player, sailing mainly in international waters where no entity has real authority to impose its rules.

Despite the legislative obstacles mentioned previously, initiatives are emerging to include the shipping industry in the carbon market.

Green Marine points out that many companies already agreeing to exceed regulatory requirements through its voluntary environmental certification program could benefit from a carbon market, which is an interesting incentive tool in that it encourages technological innovation and rewards the best performing companies. However, Green Marine emphasizes that there are many details that need to be worked out and that the system needs to be widely adopted in North America given the economic integration of Canada and the United States.

The SODES, which is favourable in the principle, nevertheless expresses some reserves as to the activities targeted, the type of vessels concerned and the eligible voyages. It also requests knowing and taking into account the potential for GHG reductions as well as the financial impacts for the actors involved.

It is thus foreseeable that the carbon market will be accessible to the maritime industry, at least locally at first, and that it will become more widespread in the near future. This means that shipowners subject to these new rules (i.e. trading in a geographical area where such a mechanism will be effective) will be submitted to a new set of constraints, and will be able to benefit financially from carbon credits if their vessels are efficient, or will have to take their money out of their own pocket.

Although the rules are not yet well defined, a model based on current practices can be outlined as follows:

Carbon Trading: Are You Ready?

There is still some time before this new reality reaches shipowners. The profession is ambivalent about the evolution. Major efforts will have to be made by shipowners for each of their vessels and the impacts, positive or negative, are largely unknown. However, we can sketch a guideline that will allow us to see things more clearly.

The notion of reference is essential for benchmarking a ship (as it is for any entity traded on the carbon market). Let’s compare two similar ships from the same shipowner based on actual consumption and GHG emissions data with a reference that has yet to be determined, but for which we can suggest a few ideas. To do this, we assume two identical ships on the same journey and compare them to a reference ship for which the emissions are averaged over this journey. 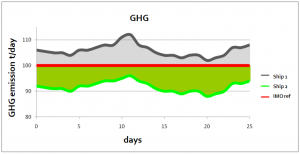 In the example above, Ship 1 is clearly less efficient and emits more GHGs than the reference. On the other hand, Ship 2 is more efficient and will contribute to the generation of carbon credits. The difference between these two ships will allow to draw up the following table of GHG credits.

The example on the left shows a favorable balance by generating 60 t of carbon credits that can be traded on the market.

By doing so on all destinations, it is then possible to bring up the carbon balance of a shipowner according to a table similar to this one:

With duly established, verified and certified data, this example shows that this shipowner would potentially be entitled to claim a financial benefit equivalent to 18 546 t of eqCO2, or about $ 400,000 CAD at 20$/t, the 2020 rate.

Regarding the reference, nothing is fixed on what it will be as yet, but a first question could arise: « if the above shipowner used a reference ship instead of Ship 1, what would be the GHG emissions of this ship »? An answer to this question could come from the IMO, which regularly publishes studies on GHG emissions by ship type and class. We learn that a bulk carrier in the 10 000-35 000 t class produces X g of GHG per t.km, a coefficient that can then be applied to the route considered and from this we can deduce that the standard reference would generate 752.4 t of GHG under the route conditions of Ship 1. This emission can then be compared to what was actually emitted by Ship 1, and then, by generalizing this process, to the entire fleet of the shipowner.

An important issue for further consideration will be to assess the extent to which the IMO coefficients, which tend to favor larger vessels on longer trade routes, can be used as a benchmark for maritime traffic in the St. Lawrence-Great Lakes region, for example, which is characterized by smaller vessels operating over shorter distances.

The advent of a carbon trade market for the maritime industry is very likely, although it is difficult to set a precise date. Europe will most likely be the first market with rules and conditions still unknown at this time. If this market has the power to galvanize GHG emission reductions by wielding the carrot and stick for both good and bad players, it is certain that the impact on the shipping industry, and primarily shipowners, will be significant. There will be winners and there will be losers. Those who are able to anticipate the new constraints and changes necessary to adapt to this new paradigm will be in good position to take advantage of this system and strengthen their position in this competitive market.

1The official list includes carbon dioxide (CO2), which is the most abundant, but there are also water vapor, methane, nitrous oxide (N2O), and several fluorinated hydrocarbons. All gases, except the simplest ones, actually contribute to the greenhouse effect.

3While the purely declarative aspect of GHG emissions may not be very demanding, the same cannot be said of future financial products for which avoidance claims must be proven, traced and verified before they can be traded on the carbon market, whether they are profitable or not.

5 The European Commission also seems rather favorable to the IMO model.