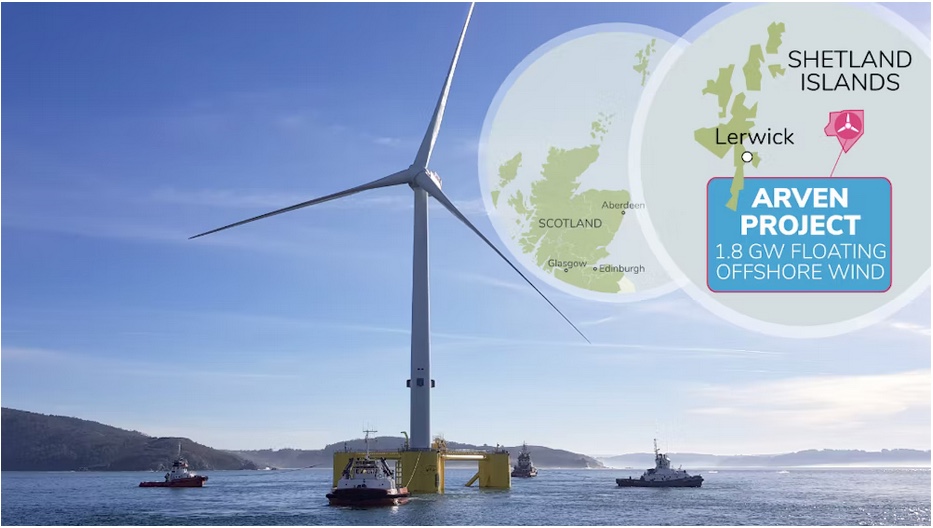 Arven Floating Offshore Wind Farm, takes its name from the Norwegian word for ‘legacy’ or ‘heritage’, and will power the equivalent of two million homes when operational

Mainstream Renewable Power and Ocean Winds, the international company dedicated to offshore wind energy, have signed the seabed lease agreement with Crown Estate Scotland to the value of Stg£36 million for the development of a 1.8 GW floating offshore wind farm off the Shetland Islands in Scotland.

Mainstream and Ocean Winds were appointed preferred bidder by Crown Estate Scotland during the ScotWind clearing process in August 2022.

With a 50-50 ownership, both Mainstream and Ocean Winds are committed to developing floating offshore wind on an industrial scale, generating local jobs and opportunities in Scotland and the Shetland Islands. The site output has the potential to power the equivalent of over two million homes and save three million tonnes of carbon emissions each year.

Commenting, Sian Lloyd-Rees, UK Country Manager for Mainstream Renewable Power, said: « We are thrilled to progress our plans for the Arven Offshore Wind Farm and, building on Mainstream’s Scottish development experience and the Aker group’s decades long offshore heritage in the North Sea, we are ready to take a leading role in industrialising floating offshore wind.

« Supporting the UK government’s Net Zero ambitions, the wind farm is well placed to capitalise on Scotland’s offshore expertise and industry as we work with local partners to explore offtake opportunities. »

With a proven foundation of delivery of projects, including Moray East, the largest offshore wind farm in Scotland, together with pioneering floating projects such as WindFloat Atlantic in Portugal, Ocean Winds is well placed to take advantage of this opportunity to support the growth of the floating wind sector in Scotland.

Ocean Winds is currently operating, building and developing three offshore wind projects in Scotland – Moray East (950 MW), Moray West (882 MW) and Caledonia (up to 2 GW). With this award, Ocean Winds now has a total portfolio of 6.1 GW in Scotland.

This is the first stage of an extensive process that these projects will go through as they evolve through the planning, consenting, and financing stages. The responsibility for these next steps does not sit with Crown Estate Scotland, and projects will only progress to a full seabed lease once all these various planning stages have been completed.

We look forward to listening to the many stakeholders who will have an interest in these projects as we start the development process to realise the potential of these projects.  Developing a robust route-to-market to underpin future investment will be an early focus,” added Adam Morrison, UK country manager for Ocean Winds.