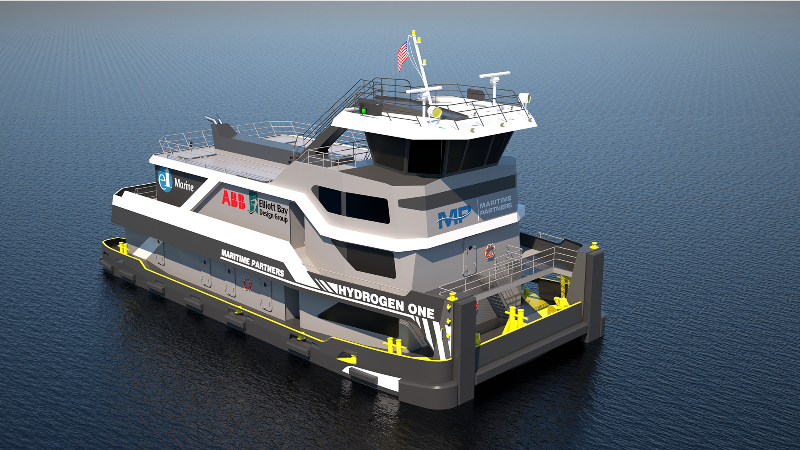 Maritime Partners in cooperation with Elliott Bay Design Group, e1 Marine, and ABB, today announces that the M/V Hydrogen One, the world’s first methanol-fuelled towboat, will join Maritime Partners’ fleet and become available for charter in 2023.

The vessel will be able to operate at standard operational speeds for up to 550 miles before it needs to refuel.

Methanol is a common towboat cargo, and it is available in 88 of the world’s top 100 ports. This availability enables you to refuel safely almost anywhere without the need for costly diversions. The M/V Hydrogen One’s use of e1 Marine’s reformer technology generates hydrogen from methanol on-demand, which also makes it considerably safer than transferring and storing hydrogen directly, and the ship’s crew will require minimal additional training to use the technology.

Austin Sperry, Co-Founder and Chief Operating Officer at Maritime Partners commented, “Shipowners have been understandably reluctant to commit to low-carbon fuels until the infrastructure is available to refuel their vessels. The M/V Hydrogen One solves that problem by using methanol, which is safe and readily available worldwide. When the M/V Hydrogen One joins our fleet of 1,600 vessels, it will not only provide excellent emissions reduction capabilities but highly functional, reliable, and cost-effective operations.”

Dave Lee at ABB Marine & Ports, commented, “The US towboat market is one of the most traditional in the world, so it’s important to recognise what this represents: the first step in a shift from diesel electric to methanol electric, and a major advancement towards zero emissions. Governed by ABB’s power management and distribution technology, the system consumes methanol fuel on-demand. This philosophy is much more efficient than a traditional towboat, where you need both main engines as well as a generator online at all times. Through this design and our technology, we’re enabling not only huge operational and cost efficiency, but making the most environmentally friendly mode of transport even more sustainable.”

Robert Schluter, Managing Director at e1 Marine, commented, “Converting methanol to hydrogen reduces CO2 output and our reformer technology eliminates the complexities of direct fuelling and storage of gas marine fuels. By producing hydrogen at the point of consumption from a mixture of methanol and water, e1 Marine’s system enables the safe, efficient, and economical use of hydrogen as a marine fuel. The technology is ideal for anything that requires continuous power over extended periods, including work boats and medium-range passenger vessels, or to provide backup power in ports and harbours.”

Mike Complita, Principal and Vice President of Strategic Expansion at Elliott Bay Design Group, commented, “M/V Hydrogen One is the model for what is likely to be the only practical and commercially available technology that will enable smaller vessels to run for multiple days on a single fuel load and without the need for dedicated refuelling facilities. Our naval architects have optimised the balance between reformers, fuel cells and batteries to maximise range and power while minimising operational costs. This design and the technologies it uses can be easily scaled to suit any vessel with a similar need to operate on variable routes with multiple-day transit times, and further enhances Elliott Bay Design Group’s market-leading expertise in this growing sector.”

As reported earlier Wärtsilä, together with class society RINA, ABB, Helbio – a subsidiary of Metacon AB, the Liberian Registry,are working on a concept based on combining LNG with steam to produce hydrogen and CO2.