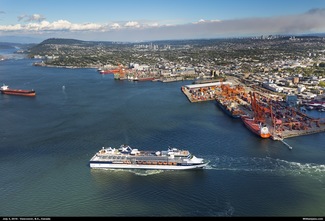 The Vancouver Fraser Port Authority announced that overall cargo through the port was 144 million metric tonnes in 2019, down 2% from the 2018 record of 147 million metric tonnes but the second highest in port history. Sectors that experienced declines, including foreign petroleum products and domestic forest products, were offset by record growth in other sectors including potash, grain and containers.

« We saw strong trade growth through the port during the first half of 2019 that reached record levels, and a softening in the back half due to various issues affecting global markets, » said Robin Silvester, president and chief executive officer of the Vancouver Fraser Port Authority. « Despite these challenges, and during one of the most uncertain years for global trade, we still saw the second highest volume of cargo through the Port of Vancouver to date. This speaks strongly to the diverse number of trading partners and range of cargo handled by terminals at the Port of Vancouver, which ensures the entire port remains resilient, regardless of variations in any one sector or commodity. »

While grain products reached record levels in 2019, this sector was the most significantly impacted by tariffs and trade challenges with China, resulting in a 37.3% decrease in grain exports to this economy. In fertilizers, potash exports increased by 2% to a record amount of 9.4 million metric tonnes.

Foreign petroleum products were down 42% over 2018. Year-over-year fluctuations in volumes through the port for this sector are not uncommon and were largely affected by U.S. refineries buying crude from U.S. sources, use of transportation alternatives, and product pricing. Domestic forest products declined 6% due to a reduction in local milling activities.

Shipping container quantities, measured by 20-foot equivalents or TEUs, were a record 3.4 million TEUs, a slight increase of 0.1% compared to 2018 results. While the sector is forecast to continue to grow, 2019 results reflected a number of factors including trade conflicts and shipping lines adjusting services based on market conditions.

With projected long-term growth in container trade, the port authority is leading two container terminal projects and has partnered with government and industry to invest in road and rail and other infrastructure projects to support a more fluid supply chain.
The Centerm container terminal expansion project will increase the existing terminal footprint by 15% and reconfigure terminal operations, which will increase capacity by about 65%. The proposed Roberts Bank Terminal 2 Project is a new terminal which, when complete, would add nearly 50% more container capacity to the Port of Vancouver. (photo VFPA)