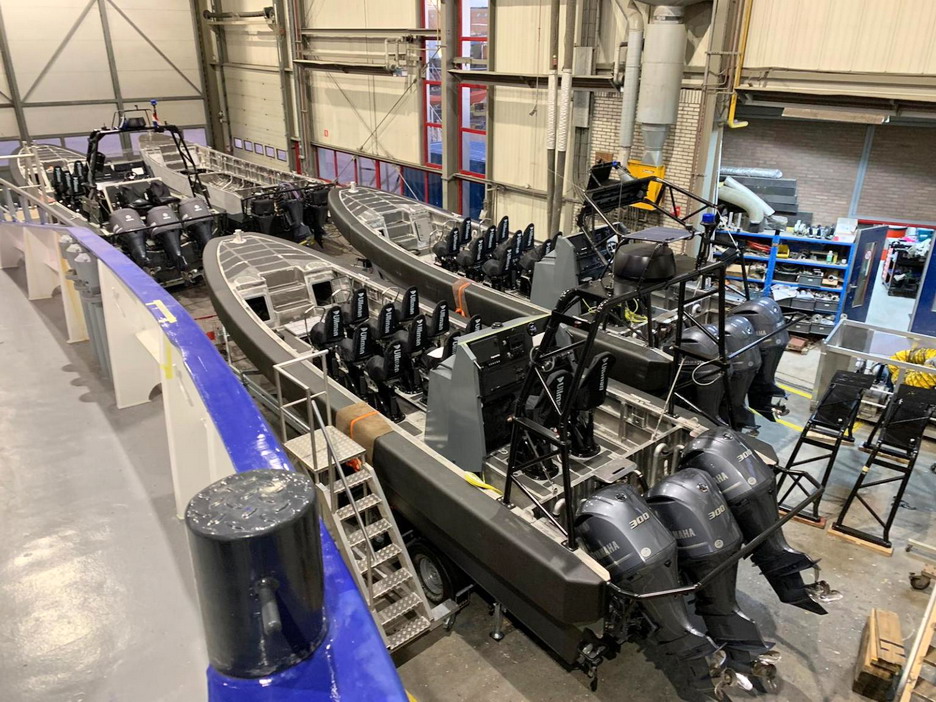 The Nigerian Maritime Administration and Safety Agency (Nimasa) has taken delivery of patrol vessels and rigid-hulled inflatable boats as part of its Deep Blue maritime security project, and is gearing up to receive maritime surveillance jets, helicopters, unmanned aerial vehicles and other equipment.

The fast interceptor rigid-hulled inflatables appear to be De Haas Maasluis DHM1050 boats, built in the Netherlands. The 10.45 metre long vessels are fitted with triple 300 hp Yamaha outboard motors, giving a top speed of nearly 60 knots and a payload of 2 000 kg. They are fitted with ten passenger seats in front of the pilot’s station.

Earlier this year De Haas said it was building 18 DHM1050s in 12 months and thanked its partners Blue Octagon, Baltic Workboats, MARIN, Yamaha Motor Europe and Ullman Dynamics for their participation in the project. Under its active projects list it has 17 DHM1050s as being built for a foreign customer, with delivery from 2019.

The unmanned aerial vehicles appear to be RemoEye 002Bs manufactured by South Korea’s Uconsystems. The type has a wingspan of 1.8 metres, top speed of 80 km/h, endurance of 60 minutes and range of 10 km, according to the manufacturer. The 3.4 kg aircraft is powered by an electric motor and has an electro-optical/infrared camera payload. It is hand launched and recovered via an airbag system. It is not clear if the unmanned aerial vehicles are being supplied through Nigeria’s Proforce, as the company in 2016 said it was marketing the RemoEye 006 UAV.

Proforce is supplying armoured personnel carriers to Nimasa, which will use them to strengthen security on the Niger Delta through land patrols. It is not clear what model of vehicle Proforce is delivering for the Deep Blue project.

The fixed wing aircraft are Cessna Citation CJ3 jets. In December 2018 Israel’s BIRD Aerosystems said it had been contracted to supply Cessna Citations configured for the maritime surveillance role to a new, undisclosed African customer, which is believed to be Nigeria. The aircraft will be fitted with BIRD’s Airborne Surveillance, Intelligence and Observation (ASIO) maritime solution as well as its Mission Management system (MSIS).

In February this year Nimasa received some of its largest assets under the Deep Blue project. These were two Special Mission Vessels to fight piracy and maritime crime. The two vessels were launched by Shipyard De Hoop in Foxhol, the Netherlands, on 1 July 2019. Sea trials of the DB Abuja (457) were completed towards the end of October, with the DB Lagos (459) following the next month.

The DB Abuja and DB Lagos were custom designed by Shipyard De Hoop. The 55 metre long vessels feature hybrid diesel-electric power plants for low fuel consumption, with electric motors used at low speed and twin Caterpillar diesels providing up to 4 700 kW for full speed (cruise speed is 21 knots). The DP2-class vessels were developed for round the clock operations and are capable of remaining on station autonomously for at least thirty days. Each vessel can accommodate up to 36 people. A helicopter is able to land on the aft deck, while a pivoting A-frame davit can launch and retrieve interceptor boats weighing up to 5 000 kg.

The government is acquiring these assets under its Integrated National Security and Waterways Protection Infrastructure (Deep Blue) Project, which aims to combat issues such as illegal fishing, terrorism, oil theft, illegal immigration, smuggling and piracy in Nigeria’s exclusive economic zone and the Gulf of Guinea. Most assets were to be delivered by mid-2020.

Israeli company Blue Octagon is sourcing much of the hardware for Deep Blue, which also includes a command, control, computer communication, and information (C4I) centre, which began 24 hour operations in August 2019 at the Nimasa base in Kirikiri, Lagos.

“Deep Blue is on guard 24/7, constantly monitoring activities around maritime frontiers — and far beyond them — identifying and analysing suspicious activities from their earliest stages. By providing the basis for an array of passive and active measures, it effectively expands the defensive perimeter of a nation’s Exclusive Economic Zone, while requiring minimal human resources and maintenance,” Blue Octagon said.