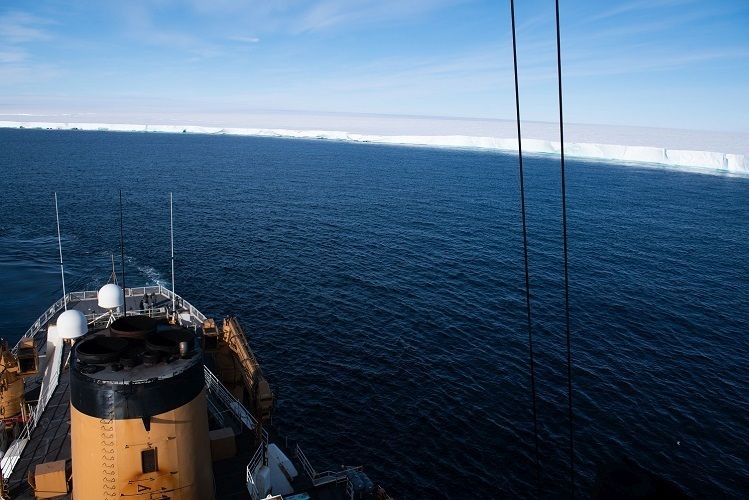 The aging U.S. Coast Guard icebreaker Polar Star (WAGB 10) reached the southernmost navigable waters on the planet on Feb. 17 with a visit to Antarctica’s Bay of Whales. Polar Star reached a position of 78 degrees, 44 minutes, 1.32 seconds south latitude at 12:55 p.m. New Zealand time, holding a distance of approximately 500 yards from the edge of the Ross Ice Shelf, further south than the current Guinness World Record holder.

While underway, Polar Star sailed in waters previously charted as part of the ice shelf that are now navigable waters. Today, portions of the Ross Ice Shelf deviate approximately 12 nautical miles from the positions depicted on official charts.

During the icebreaker’s transit to and from the Bay of Whales, Polar Star surveyed 396 nautical miles of the ice shelf for potential future navigational use.

Crewmembers aboard the cutter are working with the staff at Guinness World Records to officially become the new record holders.

In 1908, Ernest Shackleton gave the Bay of Whales its name during the Nimrod Expedition on the basis of the numerous whales he and his crew sighted. Three years later, Roald Amundsen established a base camp in the bay, from which he set out on his successful endeavor to become the first person to reach the South Pole. Years later, U.S. Navy Rear Adm. Richard E. Byrd established Little America in the Bay of Whales during his first, second, and third Antarctic Expeditions, exploring more than 60% of the Antarctic continent.

“The crew of Polar Star is proud to follow in the footsteps of legendary Antarctic explorers like Shackleton, Amundsen, and Byrd,” said Capt. William Woityra, commanding officer of Polar Star. “Even today, more than a century later, we carry on that legacy of exploration, reaching new places, and expanding human understanding of our planet.” Source: USCG