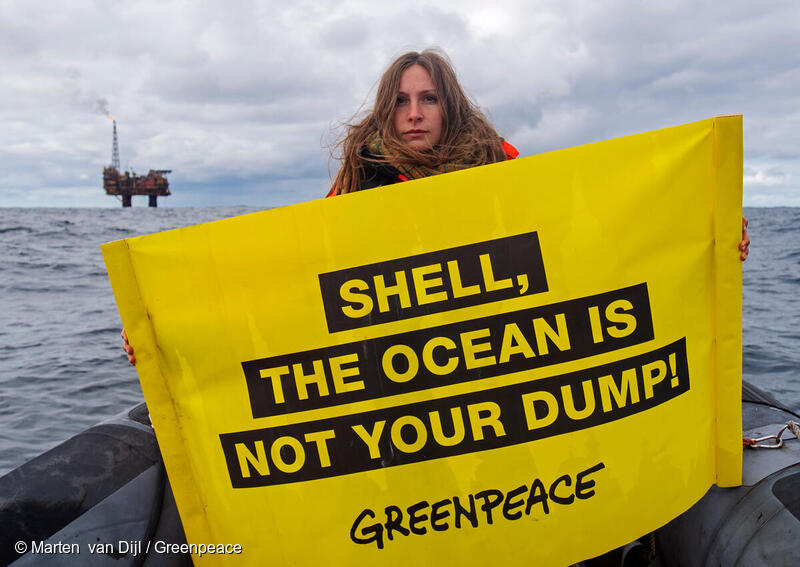 North Sea – Greenpeace activists from Germany have launched a protest in the North Sea to call out Shell’s plans to abandon an estimated 11,000 tonnes of oil in the sea.[1] The Greenpeace ship Esperanza approached the 500m exclusion zone of Shell’s platforms in the Brent oil field, off the Shetland Islands, with protestors on board waving banners calling on Shell to clean up its mess. Today’s protest also highlights how Shell is failing to take responsibility for its harmful impact on the environment.

Dr Christian Bussau, Greenpeace Germany marine biologist, said: “Shell still wants to cheaply dismantle the platforms, and the UK government is colluding with them to allow it. Shell’s profit-before-people business model is blocking an opportunity to create jobs to dispose of the 11,000 tonnes of oil and parts of the platform that must be removed in an environmentally friendly manner. Shell must urgently get out of the dirty oil and gas industry and pivot its business to renewable energy.”

Shell has felt the pressure in recent months after the global pandemic saw oil demand plummet and accelerated the need for fossil fuel companies to transform their businesses. According to Shell’s decommissioning proposals, it will leave behind the remains of four platforms in the Brent oil field. Shell estimates three of those platforms contain 640,000 cubic metres of oily water and 40,000 cubic metres of oily sediment with a total content of more than 11,000 tonnes of oil. [1]

“While the rest of the world has moved on, Shell apparently still believes the world is its garbage dump, just as it did 25 years ago. If we don’t immediately transition to renewable energy we’re going to see more leaks and oil spills, more fossil fuel-driven inequality and more exacerbated extreme weather events like the floods, fires and storms we’re seeing everywhere. A just transition means governments turning their backs on fossil fuel and supporting workers into shifting to jobs with a future.” said Bussau.

In October last year, the member states of the OSPAR Commission (Convention for the Protection of the Marine Environment of the North-East Atlantic) met in London and discussed Shell’s plans, with the UK government indicating its approval. The German government lodged an official objection. The EU Commission, Sweden, Belgium, Denmark, and the Netherlands also spoke out against leaving 11,000 tonnes of oil in the concrete tanks on the seafloor. But the final decision has been postponed and is pending. An approval from the member states would set a dangerous precedent for other oil companies and further the destruction of the North Sea. 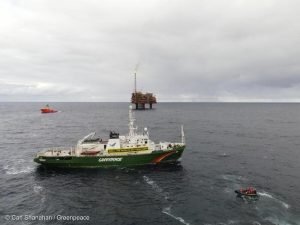 Month-long tour in the North Sea

The Greenpeace ships Esperanza and Rainbow Warrior are on a month-long investigation and peaceful protest tour to document the impacts the extraction of fossil fuels is making in the North Sea. Teams on board will gather evidence of the extreme industrialisation of the region by the oil and gas industry, which has been polluting the ocean, fueling the climate crisis and exacerbating inequality with its “business as usual” operation model.

It’s 25 years after the “Brent Spar” campaign and Shell apparently still wants to use the sea as a garbage dump. Greenpeace already protested in the Brent oil field in 1995, when Shell planned to pull the oil tank and loading platform “Brent Spar” into the North-East Atlantic and sink it there. At that time, the environmentalists occupied the “Brent Spar”. The protest attracted a lot of attention and ensured, at the time, that Shell committed to decommission the “Brent Spar” in an environmentally friendly manner and that the OSPAR states prohibited the sinking or abandonment of oil platforms, with few exceptions.