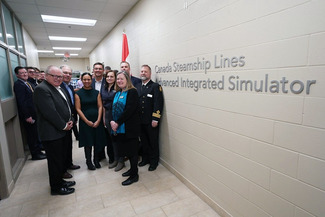 Thanks to a generous donation from Canada Steamship Lines, students in Georgian’s marine programs, cadets and working mariners will have access to a new state-of-the art simulator and upgraded on-site systems at the Owen Sound Campus. Canada Steamship Lines, a division of The CSL Group, contributed $540,000 toward the new Advanced Integrated Simulator. Georgian is now one of a few institutions with this capability – and has the only integrated Kongsberg engine/navigator simulator of its kind in Canada.

« This incredible investment by Canada Steamship Lines builds on a rich legacy of continued support, » said Kevin Weaver, Vice President Academic, Georgian College. « They’re at the forefront of new system development and innovation and have navigated the changing face of the industry since its inception. This is why they are a renowned leader and innovator in the industry – and a perfect partner for Georgian and our highly-respected Marine Program. »

Mr. Weaver added that this latest commitment is of significant benefit not only to Georgian, cadets and working mariners, but to the entire region. « It will only further enhance the reputation of this campus and our graduates – and draw in more prospective students and those working in the field who need and want to upgrade their skills. »

Canada Steamship Lines also made a substantial donation to Georgian in 2008 to help build the simulators, which have set the Owen Sound Campus and its marine programs apart. Since then, Georgian has partnered with them on corporate training and research initiatives. They have also played an integral role in supporting experiential learning by taking a large number of Georgian’s cadets since the Marine Technology – Navigation and Marine Engineering Technology co-op programs started in Owen Sound.

« Georgian College has been instrumental in providing quality education and training to many of the talented and skilled seafarers working today on CSL’s fleet, » said Louis Martel, President and CEO of The CSL Group. « We are very grateful to Georgian and proud to support the college and future generations of Captains, Chief Engineers and Officers. »

The Owen Sound Campus has been meeting the needs of the marine industry since 1967 – offering programs, advanced marine simulation, research facilities, and a wide variety of courses and corporate training. Georgian College is a recognized leader in marine education and home to the marine training centre of excellence for central Canada.