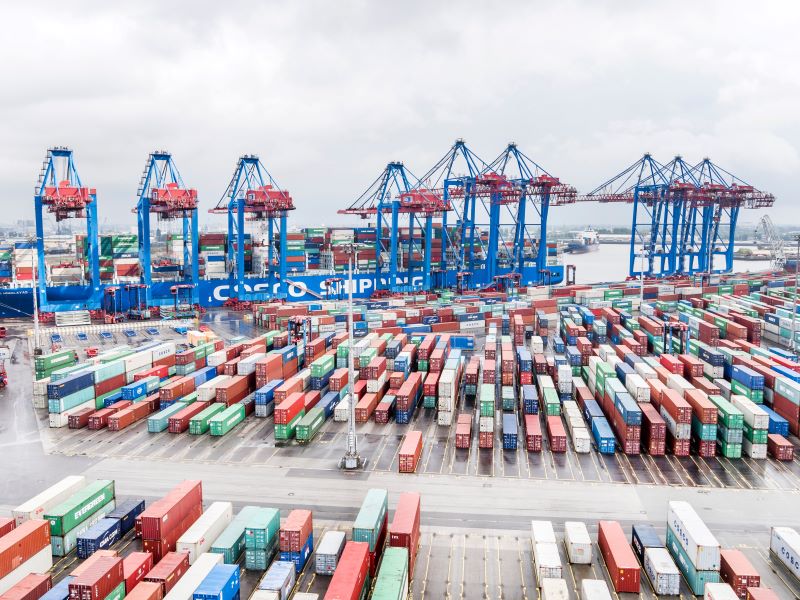 Hamburg – Cosco Shipping Ports Limited (CSPL), the terminal subsidiary of the Cosco Shipping Group, has acquired a 35 percent minority share in the Hamburg container terminal Tollerort. HHLA expects the participation to strengthen the relationship with its Chinese partner, as well as long-term planning security for Container Terminal Tollerort (CTT) and secured capacity and employment in the Port of Hamburg.

With the minority interest of CSPL, CTT will become a “preferred hub” in Europe, meaning it will be the preferred transshipment point for Cosco, where cargo flows will be concentrated.

The minority stake represents the eighth investment in Europe by the terminal-handling arm of state-owned Cosco Shipping Holdings. Other investments include control of the Port of Piraeus in Greece plus interests in in the ports of Antwerp, Rotterdam, Zeebrugge, Valencia and Bilbao.

Angela Titzrath, Chairwoman of HHLA’s Executive Board, declared: “The maritime world is currently facing intense changes. Long-term, trusting customer relationships – like the ones HHLA has tended to for 40 years in trade with China – are that much more important now. The first Chinese vessel was processed at Tollerort back in 1982.”

Zhang Dayu, Managing Director of CSPL: “Container Terminal Tollerort in Hamburg is a keystone of logistics in Europe and has excellent future development prospects. We look forward to working together with our partner HHLA to unleash the existing potential and further develop the terminal.”

Among others, two Far East services, a Mediterranean service and a Baltic feeder service of COSCO are handled at CTT today. Notwithstanding the agreed minority interest of CSPL, CTT will continue to be open to all shipping lines.

CTT is one of three HHLA container terminals at the Port of Hamburg. The terminal has four berths and 14 container gantry cranes. COSCO’s largest container ships with a capacity of 20,000 TEU and more are handled here. With its five tracks, the terminal’s own railway station is excellently connected to the hinterland, meaning goods can be moved quickly between CTT and European destinations.

The Port of Hamburg is the leading logistical hub for maritime and continental goods trade between China and Europe. Nearly every third container that is handled in Hamburg has its origin in China or is destined for the Chinese market. (Photo from Port of Hamburg)