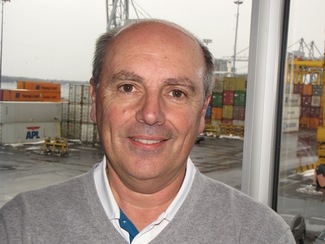 There appears to be no immediate threat that the two-week long Indigenous blockades that have crippled much of the CN Rail network across Canada will force a shut-down of the Port of Montréal. But port officials and stakeholders at Canada’s second largest port after Vancouver acknowledge that it will be « a huge problem if the crisis persists. »

« The conflict needs to be resolved soon in order to avoid permanently damaging Canada’s reputation as a reliable trading partner, » Michael Fratianni, President and CEO of Montreal Gateway Terminals Partnership, told Maritime Magazine. MGT is the largest container terminal operator at a port which handles more than 1.7 million TEUs annually.

« So far, the operational and commercial impact has been important and we are quickly approaching a critical point, » said Mr. Fratianni (pictured in photo).

Tony Boemi, VP Growth and Development for the Montréal Port Authority, estimated today (Wednesday) that « 10 to 15 per cent of our business is in a difficult position. Three carriers have diverted their cargo to CP. And some shippers are switching to truck transport. »

While no ships are reported to be lined up in the St. Lawrence channels leading to the Port of Montreal (compared with more than 40 vessels at anchor in the vicinity of the Port of Vancouver), this could change in the coming days. « A spike of ships is expected following turbulent weather on the North Atlantic, which is quite normal this time of the year, Mr. Boemi indicated.

German carrier Hapag-Lloyd, in a message to customers, remarked that CP Rail activity has been little affected and recovery is continuing at the Port of Prince Rupert following the lifting of a blockade in northern British Columbia. However, with few trains operating in the Halifax-Montréal corridor, « various options to move/divert cargo out of Halifax are being explored. »

Meanwhile, in Québec City, Premier Francois Legault said Ottawa needs to set a deadline for the end of the blockades. Late today (Wednesday), the Liberal government of Justin Trudeau was still immersed in discussions aimed at finding a « peaceful » resolution through dialogue with various Indigenous representatives opposed to the construction of a pipeline running through the hereditary land of the Wet’suwet’en people. (photo Leo Ryan)