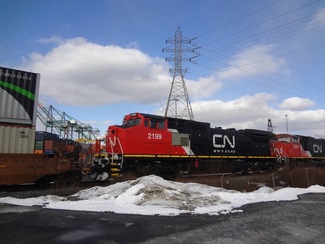 Canadian ports are becoming increasingly concerned after CN shut down Thursday most of its freight and passenger networks, notably in eastern Canada as Indigenous blockades continued to cripple the country’s transportation system. Today, in Ottawa, Transport Minister Marc Garneau nevertheless gave the good news of the re-opening of the rail line in northern BC between Prince George and the Port of Prince Rupert after the lifting of the blockade at New Hazelton. CN transports some $250 billion worth of goods annually, with another substantial volume moved by CP Rail.

On the West Coast, container dwell times have been increasing at the ports of Vancouver and Prince Rupert. Overall traffic has also reportedly been impacted to varying degrees at the ports of Montreal and Halifax, with the latter only served by CN.

« We hold a deep respect for the Wet’suwet’en hereditary chiefs and those standing in solidarity with them. However, this continued disruption to Canada’s supply chain is having a significant impact on our economy and is being felt by Canadians from across the country, let alone by those who rely on rail service for their livelihood, » said Wendy Zatylny, President of the Association of Canadian Port Authorities. « As Minister Garneau stated in his remarks this morning, this issue deeply affects Canadians on an every-day level, inhibiting access to food and other necessities that allow them to go through their days.

« The impacts are being felt immediately. At the ports, we are beginning to see instances where Canada Port Authorities are turning away ships, and cargo is beginning to be rerouted to ports in the United States. In other instances, shippers are looking at alternatives to move cargo, including the use of trucks. When you consider that a single rail car carries the equivalent of about three transport trucks, an extended disruption of rail traffic will have a major impact there as well. »

Ms. Zatylny stressed: « In addition to its effect on the economy and on people, this service disruption has the potential for long-lasting reputational damage to Canada’s ports and our transportation system as a reliable and efficient means of moving cargo. We welcome the reopening of the rail line to the Port of Prince Rupert, and urge all parties to move towards a quick and positive resolution in the remaining affected areas – one that will to allow cargo and people to move across Canada once again. »

Mr. Garneau indicated the federal government was not prepared to take any action at this point beyond sending to cabinet ministers to confer with First Nations protesters. On Thursday, CN Rail announced it was « initiating a progressive and orderly shutdown of its Eastern Canadian network » because Tyendinaga Mohawk protesters near Belleville, Ontario had so far refused to dismantle their blockade. The protests began last week after the RCMP enforced a court injunction against Indigenous leaders who had been halting construction of the Coastal GasLink pipeline project on the BC coast. (photo HPA)