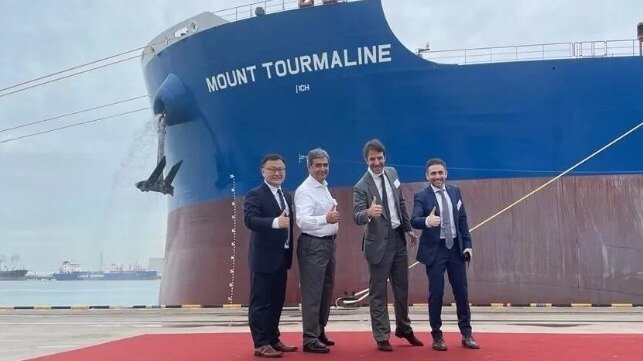 BHP says that the 209,000 dwt vessel is the cleanest and most efficient in the entire dry bulk shipping fleet and is IMO 2030 compliant, eight years ahead of schedule.

On its maiden voyage, Mt. Tourmaline arrived at Jurong Port in Singapore for her first LNG bunkering operation. It was handled by the first LNG bunker vessel in Singapore, the FueLNG Bellina. The operator, FueLNG, is a a joint venture between Shell Eastern Petroleum and Keppel Offshore & Marine. After LNG bunkering, the vessel will leave for Port Hedland in Western Australia for iron ore loading operations.

“Today’s historic LNG bunkering is further evidence that the industry’s energy transition is in full swing. These dual-fuel LNG Newcastlemax vessels are a world first, but more importantly, they represent a culture shift in shipping and mining,” said Cyril Ducau, EPS CEO.

BHP expects the LNG-fueled vessels to reduce GHG emissions intensity by more than 30% on a per voyage basis when compared to a conventionally fueled voyage. They will contribute towards the company’s 2030 goal to support 40% emissions intensity reduction of its chartered shipping of its products.

Taking delivery of the LNG-fueled bulk carrier forms part of the mining giant’s plans to become carbon neutral. Last year, BHP took part in the first marine trial using biofuel aboard an ocean-going bulk vessel, which was performed in Singapore.

The company says that it is also exploring additional partnerships focused on wind-assisted propulsion and renewably produced future fuels. The company expects that in the long term, new fuels – such as green/blue ammonia or methanol – will be required to fully decarbonize the industry.