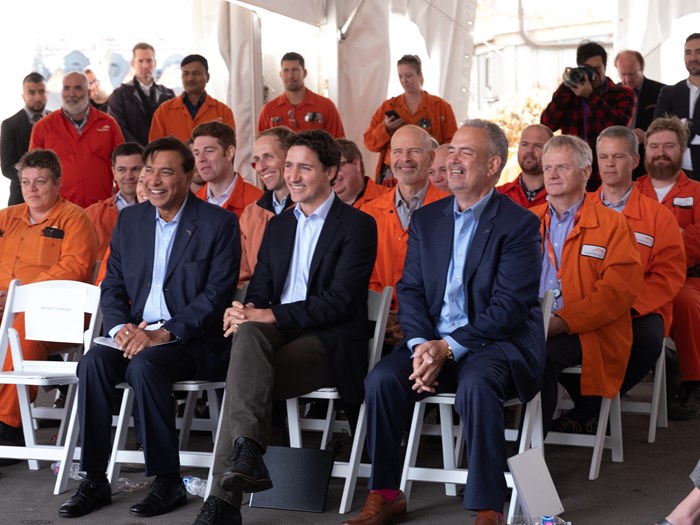 ArcelorMittal, in the presence of the governments of Canada and Ontario, has broken ground on its CAD$1.8 billion investment decarbonisation project at the ArcelorMittal Dofasco plant in Hamilton, Ontario.

The project, a partnership between ArcelorMittal and the governments of Canada and Ontario, which was first announced in July last year, will play an important role in ensuring the Company makes progress this decade with its decarbonisation efforts and is part of ArcelorMittal’s target to reduce the carbon intensity of the steel it produces by 25% by 2030.

It also demonstrates the power of public and private partnerships to accelerate progress, which are vital if the target of limiting the average global temperature increase to 1.5 degrees is to be achieved. The governments of Canada and Ontario having committed CAD$400 million and CAD$500 million respectively to the overall project cost.

The project will fundamentally change the way steel is made at ArcelorMittal Dofasco, transitioning the site to direct reduced iron-electric arc furnace (‘DRI-EAF’) steelmaking, which carries a considerably lower carbon footprint and removes coal from the ironmaking process. The new 2.5 million tonne capacity DRI furnace will initially operate on natural gas but will be constructed ‘hydrogen ready’ so it can be transitioned to utilise green hydrogen as a clean energy input as and when a sufficient, cost-effective supply of green hydrogen becomes available.

Speaking at the event, Prime Minister Trudeau said: “ArcelorMittal Dofasco’s steel plant is not just a cornerstone of the Canadian economy and the Hamilton community – it’s an example to the world of what clean innovation will look like.”

Reinforcing the Government of Canada’s support, Minister of Innovation, Science and Industry François-Philippe Champagne, declared: “Today represents a major step on our way to a net-zero future. Canadian steel companies are world-class and this project places Canadian workers at the heart of the future of the steel industry.”

ArcelorMittal Chairman, Lakshmi Mittal said: “Today is a historic moment for our company. This is the first full-scale decarbonisation project we have broken ground on since announcing our commitment to achieve net zero by 2050 and reduce emissions intensity by 25% by 2050. We believe that what we are starting here today in Canada can become a model for the rest of the world in how to decarbonise steel.”

Sharing progress of the investment, ArcelorMittal Dofasco President and CEO, Ron Bedard said:“This project provides us with a tremendous opportunity to transition ArcelorMittal Dofasco into one of the world’s cleanest, lowest carbon and modern steel manufacturers. While it involves installing new technology and equipment, the investment is really about people and planet.”

Since the project was initially announced last year, ArcelorMittal Dofasco has established a dedicated project team to manage its transition, completed significant pre-front end engineering and design (pre-FEED) work as well as analysis of the equipment needed for its transformation.

Today, the Hamilton team shared updates on the project’s progress including news that ENERGIRON, the innovative direct reduction technology jointly developed by Tenova S.p.A. and Danieli & C. S.p.A., has been chosen as its DRI equipment. It will produce 2.5 million tonnes of DRI per year to be used in Hamilton’s EAFs to produce the most demanding steel grades. The DRI plant will be the largest single-module direct reduction plant in Canada.

The first onsite construction work will begin in January 2023, with the demolition of the decommissioned No.1 Coke Plant to make room for the new DRI plant. Demolition is anticipated to take up to nine months to complete.

Also in 2023, detailed engineering work will be undertaken before foundation work begins in 2024. Construction will become visible from outside the manufacturing campus in 2024 as the structures begin to take shape. Construction on the new assets will be complete in 2026, at which point a 12 to 18-month transition phase will begin with both steelmaking streams (BF-BOF and DRI-EAF) active. The transition will be complete by 2028.

In addition to the new DRI facility, the project also involves the construction of an EAF capable of producing 2.4 million tonnes of high-quality steel through ArcelorMittal Dofasco’s existing casting, rolling and finishing facilities. Modification of ArcelorMittal Dofasco’s existing EAF facility and continuous casters will also be undertaken to align productivity, quality and energy capabilities between all assets in the new footprint. (Photos ArcelorMittal)